Inspired by the Isle of Arran’s illicit whisky trade in the 18th and 19th centuries, Quarter Cask ‘The Bothy’ is a single malt, bottled at natural cask strength for an intensely rich and satisfying dram.

Small, easily transportable whisky casks were a common feature of the island’s former illicit distilling past. Reflecting this heritage, Quarter Cask goes through an unusual cask maturation, and is initially aged in ex-bourbon barrels before transfer to smaller ‘quarter’ casks, which intensifies the maturation process and adds an extra dimension of spice.

This unique whisky is crafted at Arran’s Lochranza distillery with a blend of Scottish-grown malted barley, and fresh water from nearby Loch na Davie, reputedly the source of the purest water in Scotland.

Once the malts have been fermented with yeast, the ‘wash’ is then double distilled in copper pot stills, before being laid down to mature in First-Fill ex-Bourbon barrels for seven years, before being transferred for secondary maturation into smaller American oak casks for a further two years.

Isle of Arran Distillers bottle this single malt at a natural cask strength of 56.2% abv, and to present the whisky in its unadulterated, purest form, and retain its full flavour, choose to not chill filter.

Arran’s Quarter Cask is a sumptuous, satisfying dram with a rich golden colour. Full-bodied, this cask-strength single malt delivers the classic Arran citrus notes with rich vanilla and spice and is best enjoyed as it comes. 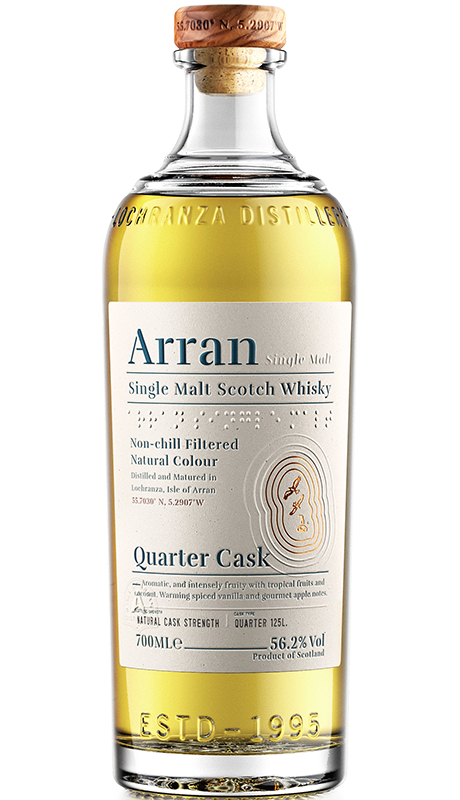 Bold, with sweet cinnamon and vanilla

Honeyed, with a touch of wood influence