Bottled at a higher strength than its Single Malt sibling, Arran’s Machrie Moor Cask Strength is a robust and layered dram, with the house’s signature orchard fruits bolstered with satisfying hints of red berries, creamy vanilla, and coconut.

It’s named after the mystical peat bog known as Machrie Moor. Long a source of storytelling that goes back to the Bronze Age, this wild landscape is a place of rugged beauty. Legend has it that legendary warrior giant Fingal tied his favourite dog, Bran, to the stone circles which have stood on the island for over 4500 years.

Arran craft this unique whisky with a blend of Scottish-grown barley. The malting process begins by blending them with fresh water from nearby Loch na Davie, reputedly the source of the purest water in Scotland.

The damp barley malts are then dried over a peat-heated fire to give this whisky its distinctive smokiness. Once the malts have been fermented with yeast, the ‘wash’ is then double distilled in copper pot stills, before being laid down to mature in ex-Bourbon barrels.

This powerful single malt is bottled at cask strength of 56.2% abv at natural colour and non-chill filtered to preserve the whisky’s clarity in all serves.

Pale gold in colour, Machrie Moor Cask Strength is a full dram, rich in fruit and wood smoke, with a lift of citrus and spice. This memorable dram is best enjoyed neat, or opened up with a touch of water. 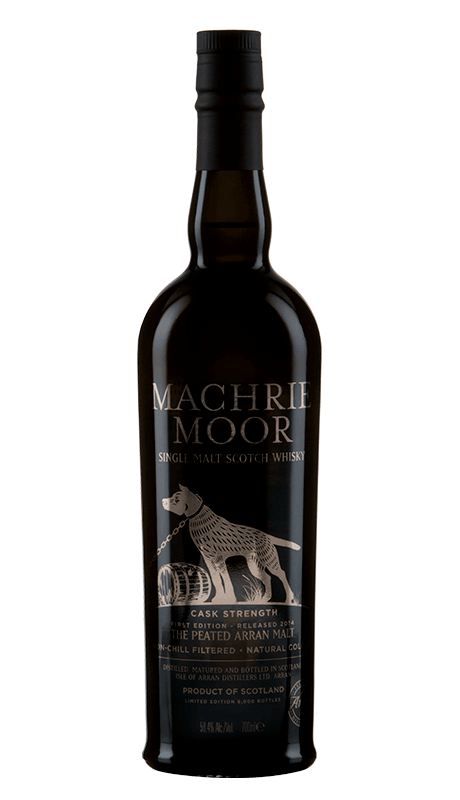 Long and satisfying with creamy notes of vanilla and coconut