An homage to the Scottish bard, this is a pleasingly versatile dram. Endorsed by the Robert Burns World Federation, The Isle of Arran Distillers is the only whisky brand in the world who can legitimately use his name and likeness on their label.

The Robert Burns Blend is skilfully crafted by Master Blender James McTaggart, creating a refreshingly dry, smooth and light dram with a hint of peat smoke and layers of fruit.

This Arran dram is made with a blend of Scottish-grown malted barley, and fresh water from nearby Loch na Davie, reputedly the source of the purest water in Scotland.

This is a double-distilled copper pot whisky, which is then laid down to age in a combination of ex-Bourbon and ex-sherry casks, where the oak wood imparts its natural colour and character.

The Master Blender selects a blend of cask-matured whiskies, which is bottled at 40% abv, and to present the whisky in its unadulterated, purest form, and retain its full flavour, chooses to not chill filter.

Amber-gold in colour with layers of red fruit, baked apple pie and a whiff of smoke, this is a delightfully smooth and versatile dram. 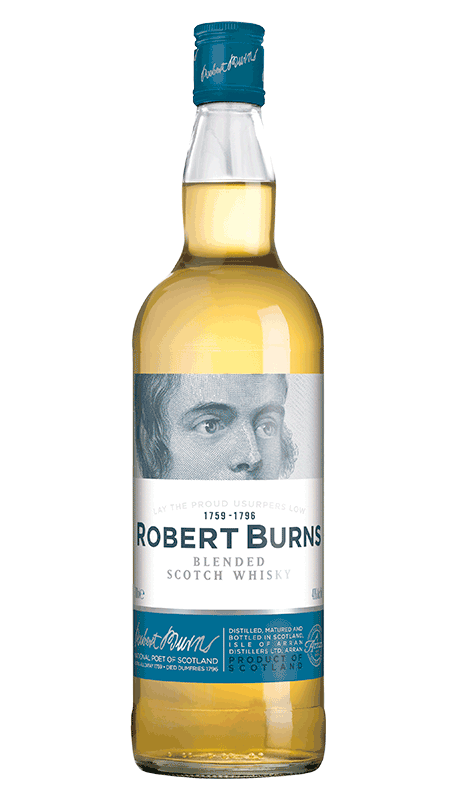 Sweet apple, liquorice, citrus and a touch of peat

Fresh and lingering with sweet vanilla