An homage to the Scottish bard, this is a pleasingly versatile single malt. Endorsed by the Robert Burns World Federation, The Isle of Arran Distillers is the only whisky brand in the world who can legitimately use his likeness and name on their label.

This edition of the Arran Single Malt is skilfully crafted using a blend of different aged expressions to create a beautifully well-rounded sweet-fruity dram that befits Burns’ name.

This single malt is made with a blend of Scottish-grown malted barley, and fresh water from nearby Loch na Davie, reputedly the source of the purest water in Scotland.

Once the malts have been fermented with yeast, the ‘wash’ is then double-distilled in copper pot stills, before being laid down to mature in a combination of ex-Bourbon and ex-sherry casks, where the oak wood imparts its natural colour and character.

Isle of Arran Distillers bottle this single malt at 43% abv, and to present the whisky in its unadulterated, purest form, and retain its full flavour, choose to not chill filter.

Golden Sunshine in colour, this is a light and easily drinkable single malt, which can be enjoyed on its own, on the rocks, or in a variety of classic whisky cocktails such as a Rob Roy or an Old Fashioned.

Sweet apple and refreshing citrus, with layers of oak and spice

Light and fresh with lingering hazelnuts and milk chocolate 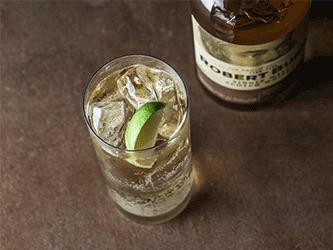