Much like the outlaws of the Wild West that give this bold whiskey its name, Yellow Rose Outlaw Bourbon breaks all of the traditional bourbon laws. For one thing, it’s made entirely from yellow Texas corn, which gives it an appealing sweetness and full flavour.

Not only does local corn have its influence on Outlaw, but Houston’s hot, humid and ever-changing climate makes its mark on the whiskey throughout its ageing, resulting in more barrel influence than some other whiskey-producing regions might achieve.

Every step in the crafting of this small-batch bourbon is done entirely by hand, from fermentation and distillation, all the way to bottling and labelling. Breaking traditional bourbon rules that require the use of at least 51% yellow American corn to produce bourbon, Outlaw is distilled from 100% Texas corn.

To fully capture the flavour of the local corn, distillation takes place in traditional pot stills at the Yellow Rose distillery in Houston. The bourbon is then aged to taste in small American charred oak barrels, where Houston’s unique climate helps to maximise the influence of the barrel.

Only once the whiskey is ready is it bottled and labelled by hand at the distillery, with each bottle bearing a unique batch and bottle number.

To fully appreciate this characterful and complex whiskey, enjoy it neat or on the rocks. 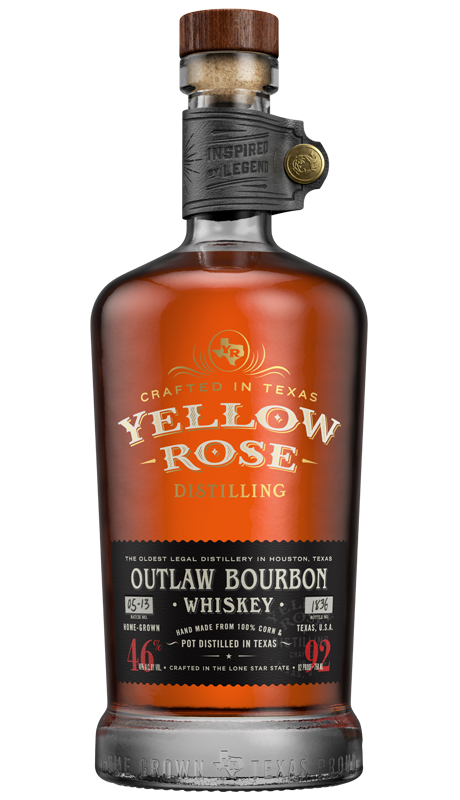 Indulgently rich, with a touch of sweetness.